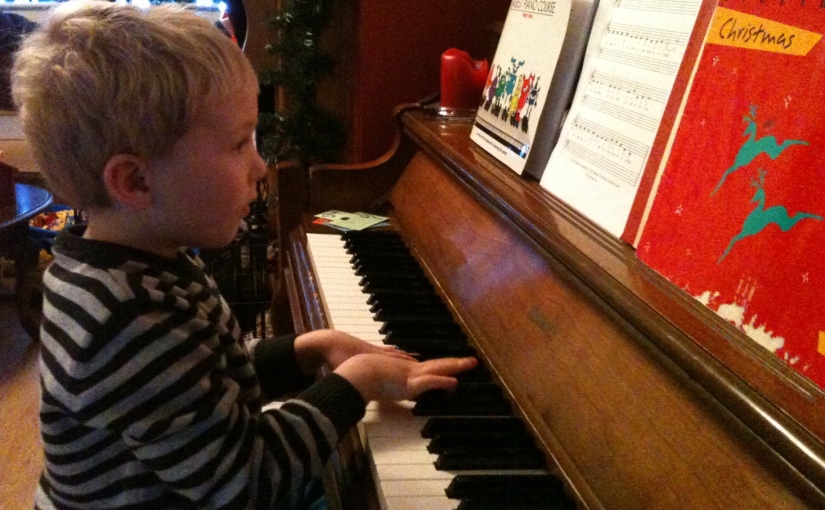 I have a greater appreciation for my mother, now that my children are learning piano. When I was a kid, it never crossed my mind that my mom might not thoroughly enjoy hearing the same simple songs played poorly over and over again. She made me practice, so she must want to hear it, right? I thought I was the only reluctant one, until my own children started playing those same simple songs, with the same mistakes, over and over again. It’s not always been very pleasant. And yet I really do like to hear it – not because of the repetitive wrong notes, but because of what they are leading to. Now that a few years have passed, the things my children play on the piano are much nicer to hear. If they keep at it, the things they’ll play in a few more years will be even better. It’s the only way forward. No one masters piano overnight. And what’s true for the instrument is also true for life:

If you want to do something well, the best way to start is by doing it poorly.

This can be applied to almost anything from musical ability and athleticism to mathematics and relationships. For myself, I’ve been wanting to get better at scheduling more intentional one-on-one time with each of my children. Life keeps pushing in on my idea, though, and it’s easy to put it off and say “after this week, things will be different” or “this is just a crazy couple of months”, while waiting for some magical slowdown in the universe to clear my schedule for me. The universe didn’t get the message, obviously. So what should I do? I know the goal is good, so why not start by doing it poorly? I don’t need to wait until I have three weeks of quality time scheduled in advance. If I have an hour today, there’s nothing stopping me from kicking the ball or building Lego or grabbing an ice cream with one of my children. This is too important not to do, and if I’m not doing it as well as I’d like yet, at least I’m doing it. I’d much rather do it poorly than not do it at all. And momentum is a powerful thing – once you’re off and moving, it’s easier to take the next step, and the next, until one day you look back and nothing is the same anymore.

It’s true for exercise and prayer, cooking and learning, loving and just about everything else. As G.K. Chesterton put it, “If a thing is worth doing, it’s worth doing badly.”

6 thoughts on “Some Things Are Worth Doing Poorly”