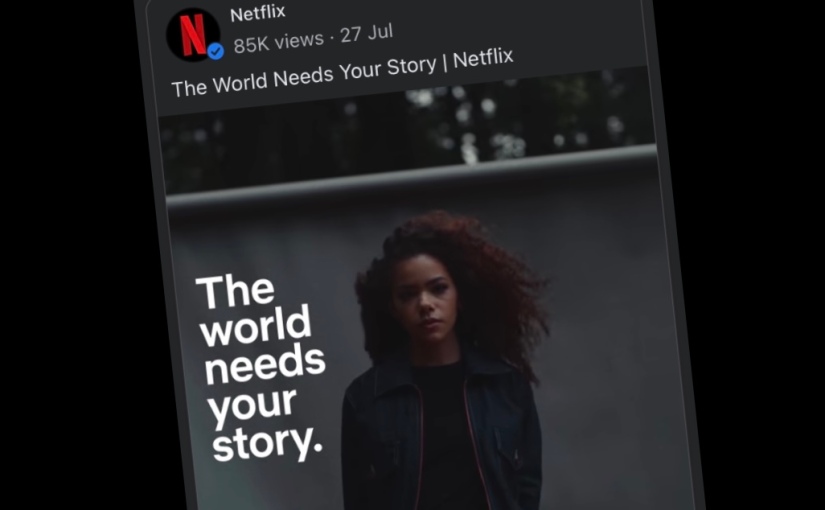 “All dreams deserve to be seen, and all stories deserve to be shared,” said the Netflix ad. “The world needs your story. Show them!” But that wasn’t the real point—it was an ad, after all—so it ended with “Discover the world’s stories.” On Netflix, of course.

But Netflix isn’t showing my story among “the world’s stories.” They don’t have any plans to produce it, either (that I know of). So how will I get my dreams to be seen? How will I get my story to be shared? I need to figure this out. After all, Netflix said, “the world needs your story.”

Does it, really? Another regular guy doing regular things in regular ways? That’s the story that the world needs? It isn’t as entertaining as the stories they already have. It isn’t as impressive, or interesting, or mysterious, or anything fun like that. There’s a reason Netflix hasn’t called for the rights to my story. Who would want to watch it?

And yet, Netflix still has a point, even if it’s not quite the one they intended. Maybe my story won’t ever be big and exciting and entertaining like the ones they show. Maybe my story will never be shared or streamed or seen at all by the masses. But does the world need it? I say yes. I say this because I was placed on this planet by the Creator of everything, who made me exactly as I am (Psalm 139:13-16), and put me here at exactly this time and place in history (Acts 17:26), and called me to follow him. My story is no accident. God put me here for a reason, and when I follow him, my story becomes part of the big, sweeping story that God himself is writing throughout history, the epic of the ages, where evil is defeated and salvation is won and people who were hopelessly lost and broken are found and restored and crowned with joy and honour. This is the story God made me to play a specific part in.

I don’t need to go viral for my contribution to the world to be valuable. My story doesn’t have to be seen by the masses to be meaningful. It is seen by God, and that’s enough for me. My goal is not to show the world my story, it is to use my story to show the world God’s story. The world needs that.

2 thoughts on “The World Needs Your Story”