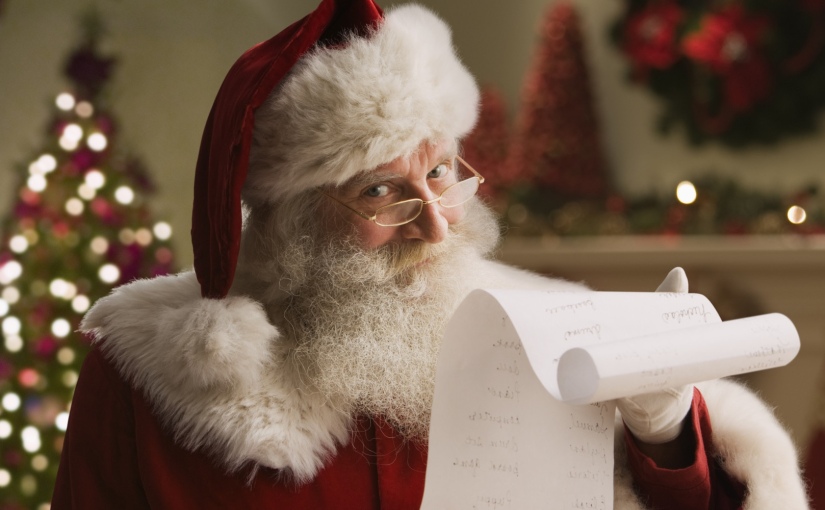 The coming of Santa is good news, as we all know. Homes with alarm systems and bolted doors still welcome a visit from the jolly old man who lets himself in through the chimney. He’s not taking anything (except milk and cookies), he’s leaving gifts behind. This is good news!

It so happens that “good news” is the definition on the word “gospel”. And though Santa is good news for children everywhere, his gospel does come with a few conditions:

The gospel according to Santa is that nice boys and girls get good gifts, and naughty boys and girls don’t. Never mind that in actual practice, it looks a lot more like rich boys and girls get the good gifts, no matter how naughty they are, and poor children don’t get much, no matter how nice they’ve been. There’s a good case to be made that Santa’s economic theory and sense of equality and justice are skewed, but that’s an issue for another day. The point for now is that we all know Santa’s rules: be nice, get presents. Be naughty, pay the price. This is how Santa’s gospel works. Bring your list to the nice man with the beard, and he’ll do his best to give you what you want, just so long as you’re nice. This, for many, is the essence of Christmas.

And Christmas certainly is about good news. But the gospel of the baby in the manger (the “Christ” before the “mas”) is quite different from the big man in red:

“When we were utterly helpless, Christ came at just the right time and died for us sinners. Now, most people would not be willing to die for an upright person, though someone might perhaps be willing to die for a person who is especially good. But God showed his great love for us by sending Christ to die for us while we were still sinners. And since we have been made right in God’s sight by the blood of Christ, he will certainly save us from God’s condemnation. For since our friendship with God was restored by the death of his Son while we were still his enemies, we will certainly be saved through the life of his Son. So now we can rejoice in our wonderful new relationship with God because our Lord Jesus Christ has made us friends of God.”
– The Bible, Romans 5:6-11

The gospel of Jesus is that even though we’ve all made it firmly on the naughty list (who among us can deny that we’ve quite often done, thought, and said what is wrong?), God was not willing to leave us there, but came among us on the first Christmas and put on our flesh so that he could take our evil on himself, kill it with his own death, then rise again in victory over it. The man in red says “Be nice, and I’ll give you the stuff you want” but the man on the cross says, “Give me your sin, and I’ll give you the life you need and the love you long for”.

The gospel of Santa might be fun, but the gospel of Jesus is the one we desperately need.

2 thoughts on “The Gospel According To Santa”